Will Wilder: The Relic of Perilous Falls 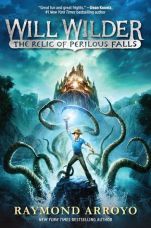 Synopsis (from Amazon): Will Wilder didn’t mean to unlock his otherworldly gift. But that is exactly what happens when Will “borrows” a sacred relic believed to protect the town of Perilous Falls for nearly a century. Even though his intentions are good, the impulsive twelve-year-old unwittingly awakens an ancient evil endangering all of Perilous Falls. As boats sink and hideous creatures crawl from the rising waters, it is up to Will to confront a nightmarish enemy and set things right before it is too late. Along with his sweet—if lethal—great-aunt Lucille, the curator of a museum of supernatural artifacts, Will proves that the actions of one twelve-year-old boy can change the world.

Review:  While the author is Catholic, this book is not targeted for only a Catholic audience. The book has very little Catholic theology, and only a few characters are Catholic. The only thing “Catholic” would be the explanation about relics, how Catholics see them, and the villains are demons. I enjoyed seeing certain aspects of Catholicism with a fantasy twist. I gave the book three stars, mainly for the writing style of the book. I read out loud to my daughter, and this was an awkward book to read aloud. The author uses too many adjectives, so the sentence structure doesn’t flow. I will read the second book in the series as I really like the concept.

The Catechism of the Catholic Church states that “Faith is the theological virtue by which we believe in God and believe all that he has said and revealed to us, . . . he is truth itself. By faith man freely commits his entire self to God. For this reason, the believer seeks to know and do God’s will” (CCC 1814). First and foremost faith is a gift from God, but it is a personal act in which each of us must respond to the God who reveals Himself to us (CCC 166).

Part of faith is believing in what one cannot see: “Faith is the realization of what is hoped for and evidence of things not seen” (Heb 11:1). This book focuses on the relic of St. Thomas AKA ‘Doubting Thomas’. He was the apostle who said “Unless I see the mark of the nails in his hands and put my finger into the nail marks and put my hand into his side, I will not believe” in the resurrection of Jesus (Jn 20:25). Jesus’ reply to him was, “Have you come to believe because you have seen me? Blessed are those who have not seen and have believed” (Jn 20:29).

If one must believe in what they cannot see, there is a misconception that humans must drop their intellect and reason to have faith. There is this idea that belief in God is irrational, and those of faith are not as intelligent. The truth is faith is never contrary to human reason (CCC 154) and “believing is an act of the intellect assenting to the divine truth by command of the will moved by God through grace” (CCC 155). Faith and our intellect are interconnected, which is why science never disproves God. Many cite scientific explanations as if scientific answers disproves God. My response always is that God created everything, including science. God, at times, does work in supernatural ways; however, the majority of the time He works WITH His design; therefore, He works with science. God is the truth, and science is the truth, and they go together, “there can never be any real discrepancy between faith and reason. Since the same God who reveals mysteries and infuses faith has bestowed the light of reason on the human mind, God cannot deny himself, nor can truth ever contradict truth” (CCC 159). Therefore, a scientific explanation of something never disproves God. Which means faith doesn’t always mean believing in what we cannot see. Faith also includes believing in what one can see, and not denying what is right in front of our eyes. Take the father of the book, Dan. He is the most unbelieving character of the book and continues to be unbelieving even when he sees the supernatural. He rejects what he sees, and his solution is to not talk about it and encourages his family to ignore what is right in front of them as well.

This happens to all of us at times. I can pray for something, and when it occurs, I don’t see it as an answer to my prayers because there was nothing supernatural about how my prayer was answered. I can see the sequence of events; thus, I can convince myself it would have occurred anyway even if I had not prayed. I can pray to be healed, and since it isn’t a miraculous “laying of the hands” healing, but a doctor with a scientific explanation, then God did not cure me it was science. Remember, God works with His design the MAJORITY of the time. The majority of the time God does not show himself in a supernatural way. God works in our daily lives, in everyday mundane aspects of life.

Is there anything in your life where you refuse to have faith in God because it is something you can see?

Published by What Can My Kids Read

I like to read and to think about the books I read. View all posts by What Can My Kids Read