The Unwanteds by Lisa McMann is the first book in a seven-book fantasy series called Unwanteds. 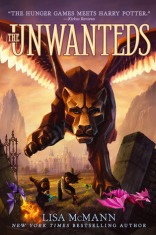 Very brief book synopsis: The book starts with the government deciding who is “wanted” in society and who is “unwanted.”  The Unwanteds are shipped to be boiled in oil (genocide). Unknowingly to the government, they are not killed but join a secret society of “Unwanteds.”  In the end, they become heroes by each person using their personal talents, which is magic as this is a fantasy book.

Understanding the evil of genocide is very simple for Catholics.  Every person is created in the image and likeness of God (Gen 1:27).  We value each person as a child of God, and God alone sustains each person’s life (Job 2:10).

CCC2319 “Every human life, from the moment of conception until death, is sacred because the human person has been willed for its own sake in the image and likeness of the living and holy God.”

We do not value human life based on perceived social worth. Human values are not the same as God’s.

Lk 16:15 What people value highly is detestable in God’s sight.

At the end of the book, the Unwanteds are able to succeed because they use their gifts.  I have already discussed how God gives each person unique talents and gifts to be used for the common good on the Calpurnia Tate book series.

I thought this discussion would be easy, but when Christians talk about genocide, the mass killings dictated by God in the Old Testament will be mentioned.  I am not a bible scholar.  When I read the Old Testament, I usually have four other books (written by bible scholars) opened in front of me.  They help me understand the genre of the book, the context, Jewish history/rituals, how the story relates to the rest of the bible, the translation, the original language, and the many other things a reader has to take into account when reading the bible.  It is no easy task!

God is the alpha and the omega.  He always has been and always will be.  God is never changing.  Therefore, we must reconcile the Old with the New.

In the Old Testament, God didn’t call for genocide, but for a just war.  You can read more about the criteria for a just war in Catechism paragraphs 2307 – 2317.

In the Old Testament, God is very clear. The destruction is based on sin and not race.

Dt 9:4 for it is really because of the wickedness of these nations that the Lord is driving them out before you.

Lv 19-24-25 Do not defile yourselves by any of these things by which the nations whom I am driving out of your way have defiled themselves.  Because their land has become defiled, I am punishing it for its wickedness, by making it vomit out its inhabitants.

At one point, God is explaining to them about the war, but tells them they have to wait because “the wickedness of the Amorites will not have reached its full measure until then (Gn 15:16).”

God did give time for conversion and repentance before calling a war. Those who repented were spared, such as Rahab. According to Mathew’s Gospel, Jesus is a descendant of Rahab. Thus her race was not an issue.

I think the confusion comes from our distortion of love. I think we forget that God is love, and God is just. Justice simply means each person will get what they deserve (both good and bad).

Parables which include justice:

Wedding Feast: those who come unprepared are cast out (Matthew 22:1-14).

Faithless Servant: the master will “punish him severely and assign him a place with the unfaithful (Luke 12:16).”

Unforgiving Servant: is tortured for not forgiving his brother.  Jesus states, “So will my heavenly Father do to you unless each of you forgives his brother from his heart” (Matt 19:35).”

Jesus doesn’t seem to have problems with comparing Old Testament judgment to future judgment, “As it was in the days of Noah, so it will be in the days of the Son of Man”(Luke 18:26).

There are more examples from Jesus as well as from the Epistles and Revelation.

The Parable of the Prodigal Son shows God’s forgiveness and mercy, but remember this son wanted it. Every time we sin, we separate ourselves from God.  We always need to repent and ask for forgiveness and mercy.  God will give it every time!  If we don’t and we continue to sin and forget about God . . . God will be just.

Published by What Can My Kids Read

I like to read and to think about the books I read. View all posts by What Can My Kids Read